I like to always have some homemade ice cream in my freezer.  Making ice cream not only causes one to feel quite accomplished in the kitchen, but it also consistently impresses guests.  And we all know that impressing people is among the better reasons to cook things that most people buy pre-made, like bread and tomato sauce.

My ice cream maker is pretty much the coolest one in the world.  I bought it at Goodwill for $3.99.  It was still in its original beat-up box.

Now, I don’t know what year this baby was made, but it’s old.  It didn’t have the original operating instructions inside.  Instead, it had this letter, dated April 26, 1977, inside.  So that should give you a clue as to how old my ice cream maker is.

Poor Betty and family.  As if this weren’t bad enough, ALSO in the ice cream maker box was this photocopy:

I sure hope that the dietary treatment for a hiatus hernia was ice cream.  But I seriously doubt it, since the maker was donated to Goodwill, seemingly unused.

Anyway, I wanted to make caramel-cinnamon ice cream.  I know, I know, those flavors are more appropriate for the Fall season.  But my awesome friend Caitlin gave me some cinnamon extract, and I’ve had this bottle of Da Vinci’s Caramel Nut Syrup, which I got for free years ago when I worked at Borders Books and the cafes in all Borders were closing and turning into Seattle’s Best.  They were supposed to have thrown the syrup away, but I salvaged it.  It also supposedly has an expiration date, but I have my doubts about that.  Especially since I’ve been making outrageously great vegan ice cream using it for a while now.  Seasons be damned, the cinnamon extract was calling out to me!  Caramel-cinnamon ice cream was just begging to be created!

I made the ice cream using basically the recipe from Veganomicon, but the coconut milk I have, for some reason, doesn’t have that thick cream on top, even when it has been stored in the refrigerator, so I added some corn starch to thicken the batter up a bit.  Also, I omitted some of the soy milk, replacing it with delicious, delicious caramel syrup.  And I added a tablespoon of cinnamon extract.  Here it is in the ice cream maker, pre-churning.

Now, what is super-rad about my old-school ice cream maker is that you don’t have to freeze anything.  You just put the whole gadget into the freezer, plug it in, close the door over the wire, and go watch The Sarah Silverman Program, or whatever.  It churns away in your freezer.

Yay!  Here’s the part where you watch TV!  Did you ever see the episode when Sarah loses her keys so she becomes homeless?  And there’s a part where a news crew goes out to interview the homeless about how the recession is affecting them?  And Sarah tells the reporter that one of the homeless guys does a great impression of Manny from Degrassi: The Next Generation?  And the guy just looks like this crazy, bearded guy who you could never imagine doing a Manny impression?  Oh man, that show is funny…

Hey, wow, the ice cream is done!  It looks much more ice creamy now, doesn’t it? 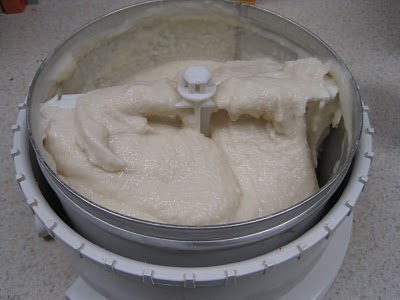 Doesn’t that look so good?  Don’t you wish you were eating that right now?  Frankly, I wish I was eating it right now.  You know what?  Stop at my apartment, maybe before karaoke on Thursday, and I’ll totally feed you some.  Lucky ducks.