Last week I took a staycation from work.  Hung around town and, looking to eat something kind of typical but something I don’t eat much, I cooked some eggplant parm.

I used Dynise Balcavage‘s recipes from her book Urban Vegan.  I love this book.  One of my favorite things about it is that the urbanity she’s referring to is none other than Philadelphia, Pennsylvania, otherwise known as “my parts.”  Local girl makes good cookbook!  Also, on the cover of her book, she’s wearing this gold necklace that has a fishy and various other items on it.  I have that necklace!  I got it at Forever 21, which I probably shouldn’t admit.  But I’ve rocked it for years.  See, here I am with my siblings wearing it.  You could tell if you could manage to look beyond my outrageous cleavage.  Perv.

Anyway, it’s a great cookbook.  Particularly good for vegan ethnic recipes that aren’t too complicated, yet are freaking delicious.  And, judging by how outrageously good John’s Marinara Sauce is, it’s good for Italian! 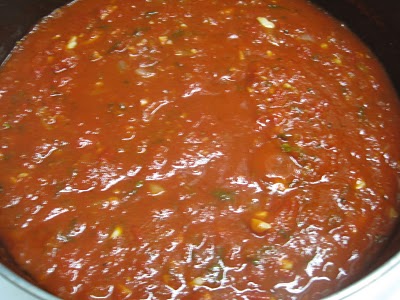 My momma used to make a similar sauce, although hers had a lot less garlic.  I’m all for garlic, though!  I made a ton of this sauce and froze what I didn’t use on the eggplant parmesan.  I mostly used the recipe from Urban Vegan to make the parm, but you know how eggplant parm goes.  It’s all more-or-less the same, and you’re really going to adjust it the way you like it no matter what a recipe says.  For instance, Dynise has you putting a whole lot of nutritional yeast in it.  But I wasn’t really feeling just putting a whole bunch of loose nooch in my layers.  I put a light sprinkling — very light.  I did, however, purchase Daiya fake cheese for the first time ever and put that on top.  And since it is the job of every vegan blog to discuss Daiya, like Vegan Dad, I’ll give you my two cents.  Verdict:  I agree with Papa Vegan.  I could just as well do without the stuff.  It’s fine.  I mean, it’s better than other vegan cheese, but I wouldn’t say it’s really worth the expense.


So, I cooked up some sun-dried tomato pasta and served some eggplant parm on top and ate like a queen on staycation!  Here it is all mushed up together, which may not look too purdy, but it tastes a lot better than it looks. 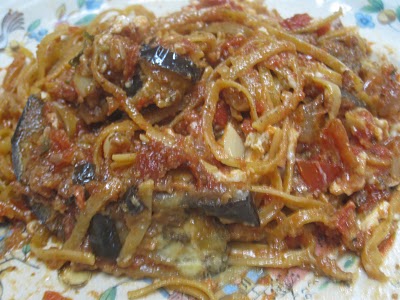 At the end of my week-long work break, I actually DID go somewhere: Philadelphia Folk Festival.  Let the debauchery begin!  It’s a wild, crazy scene there.  And hard (but not impossible) to eat vegan.  I did, however, bring some cookies, which I gave out to anyone and everyone.  I don’t mess around when it comes to bringing cookies to a situation where everyone’s going to be into eating cookies.  I made Macadamia Ginger Crunch Drops from the book Vegan Cookies Invade Your Cookie Jar, otherwise known as the Best Cookies In the World!

I’m not kidding, these are the greatest cookies ever, and they’re pretty much foolproof.  The only way you can really mess them up is if you overcook them.  I, for one, never overcook any baked goods.  I mean, really, what’s the point of baking vegan if you’re not going to take advantage of the fact that they contain no raw eggs and leave them nice and soft and chewy?  I tend to reduce the cooking time for baking by at least two minutes under the minimum time.  These cookies, though, I’ve just got to tell you about these cookies!  They’re a little crispy on the bottom but chewy throughout, and every single bite just explodes with candied ginger flavor that absolutely makes you fall over from delight.  Feeding them to folks at the Fest, people would take a bite, then go, “Oh, my god, these are really good.”  It never failed.


On the downside, though, I left them in my little cookie container inside my tent on a hot summer day and I think they got cooked a bit longer because of it.  So they didn’t quite make it to Sunday.  But everyone who got to eat them before that were able to enjoy cookie perfection.

One thought on “Eating on Staycation”