Clutter, Coconut, and Cookbooks (and Alfredo)

Who works 65 hours per week?  This girl.  My apartment is even more of a wreck than usual and I haven’t gone food shopping (although, I swear, cleaning and shopping are on the books for tonight!).  I’ve been watching that show Hoarders on Netflix Watch Instantly as I fall asleep, and it’s really lit a fire under me to unclutter.  Not that I’m anywhere near being a hoarder, but seeing these people who have a house filled with trash not be able to dispose of a 7-11 Big Gulp cup really makes me realize that I could get rid of a lot of stuff, and moreover, I ought to do so.  I just run into these things I don’t know what to do with.  Like, I overpaid for this wire I needed to hook my camera to my computer, but then I found that I already had one from my old camera and I never returned the new one, and it’s been sitting in my living room ever since.  What do I do with it?  I think it’ll end up in my wire/battery drawer.  But is that crazy?  Maybe it should go to Goodwill?  Please weigh in, I need help!

Anyway, after work on Sunday, starving, with virtually no fresh ingredients, I cooked one of my most-cooked recipes: Urban Vegan‘s Fettucine Alfredo.  I make this every time I’m hungry and haven’t gone shopping because I always have all the ingredients on hand — Earth Balance, non-dairy milk, nutritional yeast, salt and pepper, and pasta.  Dynise Balcavage suggests the addition of herbs of some sort and/or sun-dried tomatoes.  I still had cilantro from the Arroz Con Seitan and I’ve always got jarred sun-dried tomatoes in oil, so I added them.  Yum! 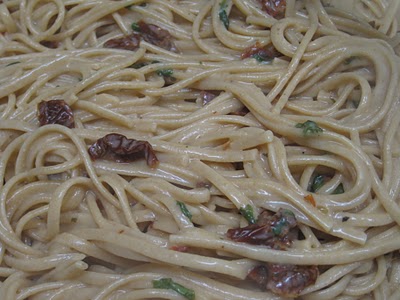 The recipe calls for soy milk, but I rarely use soy milk.  Actually, I want to take this opportunity to talk about my favorite non-dairy milk by far: So Delicious Coconut Milk Beverage.

In my opinion, it does not taste like coconut at all.  It tastes like, well, milk.  Dairy milk.  It has the consistency of dairy milk more than soy (too thick) or rice (too thin) do.  It’s not as absurdly sweet as almond milk (I know people love their almond milk, but I’m really not a big fan).  I don’t know if coconut milk beverage curdles — I still use soy milk when a recipe calls for it to be mixed with apple cider vinegar.  But if you want to make delicious creamy recipes, like the Fettucine Alfredo, I really recommend using this stuff.  I always use it, and it’s becoming more and more available.  Wegmans has it, of course, but even Giant carries it in their organic/vegetarian/health food aisle.  Pick some up!  Just know, though, that, like soy, there are folks with coconut allergies and so, when baking for a crowd, you should warn people that it contains a trace of coconut.  Say “a trace” only because you don’t want to mislead people into thinking that it is coconut-flavored, because it won’t be, and there are a lot of folks out there who believe they hate coconut.  I’m always really careful about people’s food allergies — aren’t you?  It’s really the reason I mostly stopped using soy milk, because I have a number of friends with pretty serious soy allergies.


In other news, I got some new cookbooks… like I needed that.  But I can’t help myself.  I got Supermarket Vegan from a bargain book store for a song.  Also, a friend of mine gave me her unused copy of Mediterranean Vegan Kitchen.  Both are by Donna Klein, and though I can see me using Supermarket Vegan quite a bit and am very drawn to many recipes, I don’t think I’ll touch Mediterranean Vegan Kitchen until summer comes ’round again and tomatoes are in season.  I also bought over Amazon.com the new Isa Chandra Moskowitz hilariously-named Appetite for Reduction.  I really believe that that woman should write funny essays or something, because her cookbooks, besides being so freaking amazing cooking-wise, are also a legitimately entertaining read.  Like, read the recipe for the Minonos (vegan Milano cookies) in Vegan Cookies Invade Your Cookie Jar — funniest recipe ever.  I also ordered The Vegan Cookie Connoisseur because I’m crazy about making cookies.  I have so many baking books — I hardly use The Joy of Vegan Baking — but because this one is devoted just to cookies, I’m down.  So, let there be cooking!  Especially if I can get a night off and clean my apartment first.

2 thoughts on “Clutter, Coconut, and Cookbooks (and Alfredo)”