I’m sure you’re all sick of hearing about how I’m busy.  But I’m busy!  So busy.  Pathetically — and also tragically — I was working during Phoenixville’s Firebird Festival.  The Firebird is the best event of the year in the ‘ville, and this is a town with a lot of events.  It’s very Gilmore Girls’ Stars Hollow-esque.  I don’t know if y’all have ever seen that show, but the folks there live in this town called Stars Hollow that, like Phoenixville, is highly walkable, has a downtown area where you’ll run into anyone and everyone, and has a great many events.  Stars Hollow had The Festival of Living Art, we’ve got a Jazz Festival, an Irish Festival, AND a Celtic Festival (as if we needed both an Irish and a Celtic fest).  They had a Winter Festival, we have a Christmas parade, which is reminiscent of the super-pathetic parade in the movie “A Christmas Story”.  They had a basket auction, we have an auction of chairs-made-fancy by local artists.  They’ve got a Hay Bail Maze, we have the Dogwood Fair and Parade.  They have a Dance Marathon, we have the Blob Fest, which involves a Blob Ball (the film “The Blob” with Steve McQueen was filmed here, and the Colonial Theater where much of the action takes place is still standing and continues to operate as a movie theater and live venue).  But, most notably, Stars Hollow had the Firelight Festival, Phoenixville’s got the Firebird Festival.  For the Firebird, local artists build this giant phoenix out of wood and put fireworks in its mouth.  Then, on a Saturday night, after Renaissance Faire type of people do some dancing with fire and long sticks and the like, they light the whole thing aflame.  Clay birds made by even MORE local artists are kilned at its base.  Everyone takes really similar-looking photographs, and they all look something like this:

I stole this picture from the Fest’s web site (although I could have stolen it from pretty much any of my local friends’ facebooks), which I encourage you to visit for more photos: http://www.firebirdfestival.com/.

The point is, I missed it this year.  I was working.  I didn’t even go to the many after-parties, which are some of the best shindigs of the year, only because I knew parking would be a bitch and, also, my friend had invited me to a Christmas party in Philly that I decided to go to.  I shouldn’t have, though.  It cost me a $51 parking ticket, and it wasn’t even that fun.  I was super tired, and I was far from home, and hardly knew anyone there, and the good times of Phoenixville with all of my closest friends was calling my name.  But by the time I got back to town, I was just too tired to keep making a night of it.  A little pathetic, but, as you’ll learn at the end of this entry, I am getting old.

I did, in fact, receive Appetite for Reduction and The Vegan Cookie Connoisseur  in the mail and did the thing I always do, which is that I read new cookbooks pretty much like novels — cover to cover.  Especially a cookbook by Isa Chandra Moscowitz, who is hilarious.   I would love to tell you guys about some of the super-funny things she writes in this book, but I don’t have it with me here and I’ve only written one thing down.  It’s in the obligatory “Why go vegan?” section at the beginning.  Explaining about the ecological impact of eating animal products, she says, “Keep eating those fast-food burgers and there won’t be a planet on which you can eat those fast-food burgers! You’ll just be floating in space with the burger, I guess.”  LOL!  No, really, I laughed out loud.  For a really long time.


I’m really glad I bought both of those books at the same time because Appetite for Reduction, as you might presume, is free of desserts — and I’ll never give up baking.  I think that my great love of sweets is rooted in the fact that I have type 1 diabetes (juvenile diabetes, insulin-dependent diabetes — you know, REAL diabetes) and when I was a kid, I wasn’t allowed sugar.  I used to sneak whatever I could get my hands on whenever possible, but this relative restriction made me really appreciate sweets when the doctors figured out that they’d been wrong all along, that sugar does NOT raise your blood sugar and then make it drop again without the assistance of insulin (uhhh, I could have told them that.  When I’d sneak sugar, my blood glucose would just go HIGH, it never dropped down again without me injecting insulin).  It goes to show you: 1) there are a great many misconceptions about diabetes and 2) doctors sometimes don’t know shit.  And health teachers sure as shit don’t know shit about shit!  When I was in high school, I had an argument with my health teacher, who said diabetics couldn’t eat sugar.  Ummm, yes we can.  I love sugar.  My hemoglobin A1c is 5.2, which is the hemoglobin A1c of a non-diabetic.  I’m doing great!  And I don’t even have health insurance!  BUT ANYWAY….


Looking through these two books, here are my observations.  First, I’m very excited for all of the produce-heavy recipes in Reduction.  When I first started eating vegan, that’s what I was really looking for in a cookbook, and mostly, I cooked from The Moosewood Cookbook because it was nice and veggie-heavy, although many recipes require some vegan adjustments.  I gave that book up, though, because it’s not very tasty.  Can anyone back me up on that?  Do any of you find Moosewood to be not-very-good?  I’ll take Moscowitz over Moosewood any day of the week.  I’m also thrilled that is has so many salad recipes that sound great, because I’m actually not much of a fancy salad eater.  I usually just get spinach in a bag and put some carrots and cucumber in it and top it with commercially prepared balsamic.  But I guess it’s time to get out of that particular rut.  Also, great soup recipes.  I love soup!


As for Connoisseur, I’m excited.  I folded over the corners of some 70 recipes (that’s just how I roll).  Do you guys know that the woman who wrote that is so so young?  She’s in college — her first year, I think.  She’s just a baby!  No, I’m kidding, I have quite a few friends that young, but none of them have a vegan cookbook published.  Mighty impressive.  One thing that is odd about the book, though, is that many of the pictures are pretty bad.  Super dark, not really visible, not that great-looking.  Now, I don’t actually care about that.  Really.  I know everyone in the world disagrees with me, but I really don’t care if a cookbook has pictures or not.  But still, I thought that it was kind of odd that there are quite a few crappy pictures in the book.  Not that I could do any better.

As for me, pressed for time but requiring food, I made Tomato Soup with Thyme from Supermarket Vegan.  Tomato soup is a no-brainer, and I’ve made many different recipes of it from many different books.  They’re all good.   I never met one I didn’t like.  This one’s no different.  It’s super-easy and pretty much cooks itself.  If you’ve got an immersion blender, there’s really nothing to it.  I’ve been eating it with toasted rye bread. 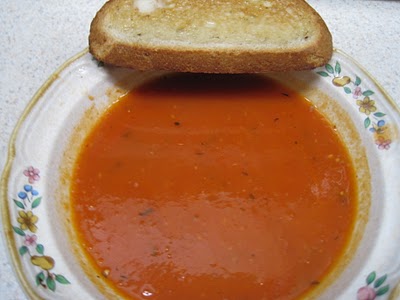 It’s my birthday on Wednesday.  I’ll be 28.  I’m working Tuesday and Thursday night, so I’d better make Wednesday count.  Tonight, though, I’m going to dye my hair, cook and bake.  Having a birthday in December sucks.  So cold, so busy, so stressful.  Maybe I’ll just start telling people that my birthday is in October, and celebrate it then, because it’s my favorite month.

Cooking with my Big Sister, Yay! »
« Clutter, Coconut, and Cookbooks (and Alfredo)