I got my very first tattoo this past Thursday.  It’s the world’s most pragmatic tattoo, but I think it’s awesome and badass.  Here it is:

I don’t know if there are any diabetic vegans out there who read my little blog, but I’d love to speak with you if you’re out there.  Also, to any diabetics — do you have a medic alert tattoo?  Would you consider getting one?  I really think it’s the best idea I’ve had in a while.  I’ve come too close to dying from low blood sugar too many times.  And, the truth is, I’m moving to a new(ish) city soon where I’ll be less surrounded by friends, at least at first, and I cannot rely on everyone being in the know about diabetes. 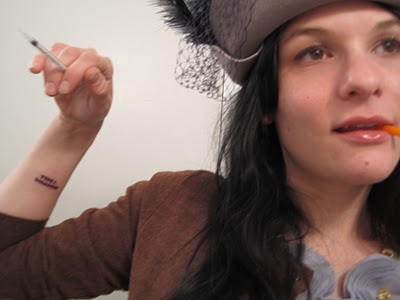 See how tiny the tattoo is?  And see how hilarious I am, holding a syringe with the syringe cap in my mouth?  I kill me!  Yes, it’s true, I’m an old-fashioned diabetic, still using multiple daily injections.  I’ve never had a pump, and I really don’t intend to change anytime soon, although I’d consider it if I were to ever get health insurance or, you know, be lucky enough to marry a Canadian who could help me out with some socialized health care.  Any awesome, smart, good-looking Canadians out there reading this?

So, hey, what’s that I said about moving?  Yes, it’s true.  I’m leaving Phoenixville at the end of the month and relocating to Pittsburgh.

WHAT?  Yes, I know, I’ll have to change the name of the blog.  Don’t worry, though!  I’ll come up with a clever solution.  I’ll really miss Phoenixville, and it will always hold a very special place in my heart, and I’ll always be back to visit.  But Pittsburgh has cheap rent where I could afford to garden, and it’s a city but not as gross and dangerous as Philadelphia, and I have a lot of friends there, and my legal experience is slightly more marketable there than in Philly.  So… I’m going.  It’s why I had that second job — to save up to move.  Speaking of which, with the end of the holidays, my retail job came to an end.  That means that I’ll have time to really cook again, as well as to pack my apartment and to spend as much time as possible with my dear, dear friends here in the ‘ville.

The Most Expensive Meal I Ever Cooked »
« Gingerbread Folks and Fall Fruit Crisp: An X-Mas Special!