I’m not sure what made me put off posting for a full week.  Maybe it’s because I knew that the pictures I’d taken weren’t very good.  And that my apple pie looks stupid.  But I really cannot explain myself.

Last weekend, though, it was my friend Kristin’s birthday, so I made her some pad thai and apple pie.  Because they rhyme!  I cooked all day, listening to CNN and crying about Gabrielle Giffords who, it turned out, had not died as originally reported.

Allow me, for a moment, to make a comment about the shootings in Arizona.  In my opinion, one cannot seriously blame discourse for this event.  Rather, there are two things I think can be pointed at as the cause.  One is more obvious: a total lack of care for the mentally ill.  My mentally ill grandmother died about a month ago, so believe me when I say that I understand why care for the mentally ill falls by the wayside — because crazy people resist help and are really, really annoying to deal with.  But still, something needs to be done.  My suggestion is that crazy people should work on farms.  They should have activities to do that will keep them busy, close to nature, and useful.  There’s actually a farm in this area that does exactly that: takes in mentally ill and mentally handicapped people and helps them work on a farm.  They also have a little restaurant for breakfast and lunch.  You know what?  It’s right nice.  It’s effective.  It’s sustainable.  We need more of that.

The other place where blame can seriously be placed is the way that white boys are being raised these days.  Many of them have a bad case of anti-intellectualism and they believe that a) the truth is simple and b) their opinions, no matter how uninformed, are just as valid as anyone else’s, regardless of their disconnection from reality.  Men my age and younger don’t believe in objectivity. They plain don’t believe in it. They believe the truth is subjective. They believe that information they don’t have is not worthy of consideration. They don’t value scientific inquiry and they don’t have curiosity enough to investigate life’s many mysteries. They believe that the answers to mysteries will simply come to them without any work, and that if it does not, either the answers or the mysteries themselves are suspect. Furthermore, they will invent simplistic answers which they will adhere to religiously out of sheer intellectual laziness. Also, many of them are functionally illiterate, yet they ALL believe that they are very intelligent. And this sense of entitlement is dangerous for all of society. I think the Arizona shootings shows this above all else.

So, yeah, Kristin’s birthday.  I doubled the recipe for Brooklyn Pad Thai in Vegan with a Vengeance to feed a crowd.  Also because the package of rice noodles just had twice as much as what was needed for the recipe, and I didn’t feel like messing with trying to take out half the noodles that are so interwoven.  Isa says that you have to do the recipe in batches, but I find that one whole recipe can be done at once if you use a big, giant pan with edges.  Because I had doubled the recipe, I still did it in two batches, but she would’ve had me do it in four.  I’m such a lazy bum, what can I say?  But it worked out really well and fed the army.  Rushing to get to the party, I didn’t take pictures in my relatively well-lit apartment and instead took it in Kristin’s beautifully decorated but dark kitchen.  So suffer with me as you look at this picture.

Kristin had told me she prefers pie to cake, and I still had extra apples, so I decided to try my hand at apple pie.  That’s right, I’d never made pie.  Oh, I’ve made quiches, I’ve made gallettes, I’ve made crisps, I’ve made grunts — but never an actual pie.  And, really, I don’t think I could have failed more!  I used the crust and pie recipe from The Joy of Vegan Baking, and my understanding is that the trick to making pie is to find a crust recipe you can work with.  Colleen Patrick-Goudreau’s is not the one for me.  I couldn’t roll it out, and I made the bottom too thick and couldn’t make a suitable crust top.  It came up short — literally.  It was pretty unpretty.  Well, see for yourself.

But, you know, it tasted pretty good, and my friends withheld judgment.  I also brought over some homemade vegan vanilla ice cream because, really, apple pie ain’t right without ice cream. 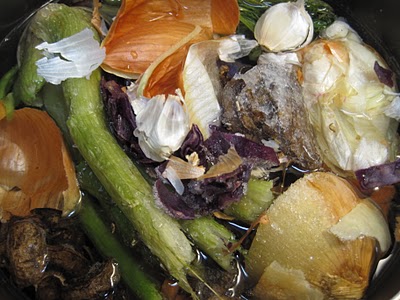 I made so much of it that I knew that even if I went crazy on the risotto, I could never use it all up before I moved, so I offered it to local friends via facebook.  My friend Kitty took me up on it and she tells me she’s been eating it plain because she’s had stomach issues.  Unbelievable — eating just plain veggie broth!  That’s rad.  I’m glad I can help do a body good.  The broth I did not give away is in my freezer and I suspect that as I get closer to moving, I’ll rely on eating whatever I’ve got left, which I suspect will mean rice mostly.  So, rice it is!  I’m prepared.

During these final weekends in Phoenixville, I’ve really learned that the people of this town will miss me as much as I’ll miss them.   I’ve gotten some really touching speeches from a lot of different people, and it has made me feel super-loved.  I’m planning a big going-away party at Morgan’s house.  I also attended the most fun party I think I’ve ever been to — a dance party that only had, like, six people invited, held in Jenn’s kitchen/living room (she’s got a truly tiny house).  Reed DJed, which he did really well, and we all just danced with no self-consciousness, drinking and celebrating and laughing.  It was so freeing and fun.  Here’s a picture of Reed and Marah kicking it.

Who couldn’t love this crew?  I will miss Phoenixville hugely.

Category: Phoenixville, The Joy of Vegan Baking, Vegan with a Vengeance

What is a Girl to Do? Blog Crisis! »
« The Most Expensive Meal I Ever Cooked