Diabetes is trying to kill me.  Seriously.  It’s out to put me in the grave.
The problem with living healthy with type 1 diabetes is that if you keep your blood sugar where it is supposed to be, which is between around 90 and 120, you’re a lot closer to having low blood sugar than someone whose blood sugars perpetually run high – over 120.  And you don’t want high blood sugars.  Those will kill you too, and, in fact, that’s how most diabetics bite it.  It’s easy to let your blood sugars run high, but it causes all kinds of problems: kidney failure, blindness, loss of feeling to your feet, etc etc.  You want to keep your sugars down.  But when you do that, you’re going to have some lows.  It’s unavoidable!  Really, low blood sugar is a side effect of having GOOD blood sugars.
But these lows are trying to kill me.  A week ago, my blood sugar was low in the morning when my alarm went off.  In the confusion that accompanies low blood sugar, I must have turned off my alarm and went back to sleep.  Work was a’callin’, and the phone woke me up.  But I was confused.  I didn’t understand what time it was.  I didn’t understand how to get dressed.  Nothing made sense.  Suddenly it occurred to me that I should maybe drink some juice.  I did so, but, for some reason, my confusion didn’t really disperse with the rising sugar.  Rather, I succumbed to the WORST MIGRAINE EVER.  I went into work, feeling totally convinced I wasn’t late, because my brain just wasn’t working.  But I realized on my way in that it didn’t feel like 8:30, it felt like, well, 11 AM.
When I got in, work thought I must have died or something.  I tried to explain myself, but I found that I couldn’t form words properly.  Nonsense was coming out.  Even though my blood sugar wasn’t low anymore!  It’s like the low blood sugar permanently killed off some of my brain cells.  And the migraine – the migraine!  Work talked to me for about 5 minutes before easily deciding I clearly wasn’t well and sending me home.  I got on the bus and felt so physically ill from the headache that when I got OFF the bus, I threw up on the ground.  Excellent.  I returned home and napped all day with my cat.
At 4:00 PM, I got up, still dying from a migraine, and decided to go to the grocery store to go food shopping and get some Excedrin.  Actually, after taking lots of pills throughout the day, and doing a ton of napping, that Excedrin actually made the migraine lift.  Alright!  Time to cook!
I made the Spinach Linguine with Edamame Pesto from Appetite for Reduction.  I think it’s a really clever idea, edamame pesto.  But it tastes, well, kinda plain.  I decided to add some jarred roasted red peppers to it to spice it up.  Only I think they went bad.  The texture was too soft, they fell apart.  That’s a pity, because I think that would have been good.  It was OK, though, because I used the oldest trick in the book (and, actually, Isa hilariously refers to this trick on page 19, saying, “Bored with fresh, healthy food?  Well, add a little excitement by burning your tongue off!”): I added hot sauce.  And, y’know, that’s delicious!  I’d totally eat this recipe again with hot sauce added.  But I’d like to try my first instinct also, the roasted red peppers.
Before you look at this picture, can I just say that I haven’t quite figured out the best way to take pictures of food in my new kitchen yet?  I can’t seem to find that ol’ sweet spot, where the light shines shinier and the pictures pic pickier… or something.  I’ll get better eventually, though, I promise! 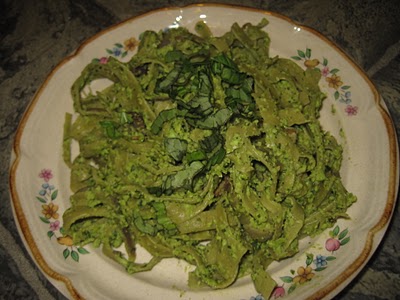 After that work fail, I thought I should bring in some cookies.  So, on Monday, I used a tried and true recipe: Banana Everything Cookies from Vegan Cookies Invade Your Cookie Jar.  You can’t go wrong with these.  They’re totally delicious, and they don’t have any classic allergens, except wheat, but wheat is to be expected.  No soy, though, nothing at all “weird” to warn people about.  I didn’t tell anyone at work that they’re vegan until after they had compliments lavished upon them.  I got the classic questions: What did you use for eggs? and Are they healthy?  Bananas are nature’s egg!  You know, after eggs.  And, yeah, actually, they are kinda healthy, relatively speaking.  But, you know, they’re cookies, not Brussels sprouts, what can I say? 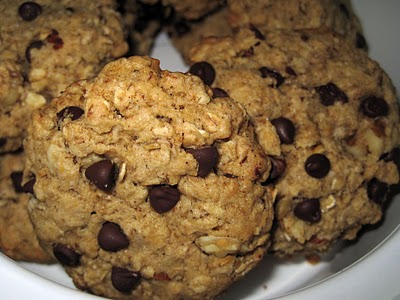 One thought on “Surviving Diabetes to Eat Pesto and Cookies”